As we all know, app rating in the App Store is one of the most important metrics to keep high to ensure that your game really takes off and stays up in the charts.

With poor ratings, you are likely to get ignored by the next person to stumble upon your game, while good ratings makes it easier to increase app downloads.

The problem is getting people to rate the game well. Communicating with your customers is hard, and getting them to rate the app is harder. Lots of developers think in-app rating prompts are simple and already handled. But with a new generation of rating prompts, developers finally have a direct way to reach their players and intelligently improve app ratings.

So far, it has been implemented poorly.

Have you ever had an experience that after playing the first level of the game, you are immediately given an in-app prompt to rate the game on the App Store? How did that make you feel, especially when you may not have done well? Well, depending on the game, people would have more likely ignored it, got annoyed, or rage rated the app for the early interruption with a measly 1 star when you hadn’t done well.

The bland and overly direct manner of seemingly “begging” for ratings through in-app rating prompts has also been seen negatively by the gaming community. More often than not, the ratings request is bland, and would most likely pass as an annoying ad.

It doesn’t have to be that way.

Sure enough, in-game rating prompts could be the game changer that we all need, but it needs to be done properly. We believe there is a solution to get that 5 star rating you have been craving for from your players.

With polljoy, each any every prompt can be as intuitively designed as your game. In fact, you can make the rating request blend in so well with your games that people won’t even see the in-app prompt as a strange request all of a sudden. 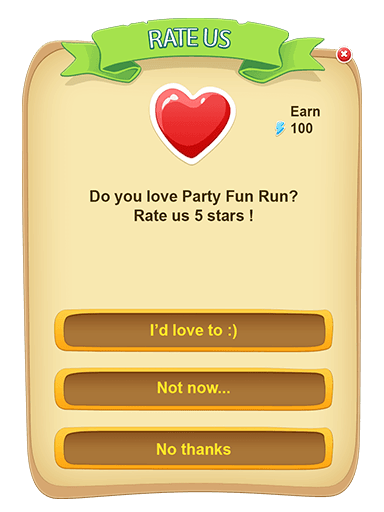 polljoy can transform the traditional in-game rating prompts into your own personal in-game customer service solution. You can determine whether a player is happy with the game or not by simply asking them how they feel about the game so far, without automatically pushing them to rate the app right away. Depending on the answer, you can either prompt them to go rate the app now (if they’re happy) or try to get the reason why they are unhappy.

Showing your customers that you care is likely to drive them to keep playing and increase game retention. This all works towards making sure they are happy with the game, and you can get them to send out those 5 hard earned stars to boost app downloads.

As you may have noticed from our previous examples, polljoy can change the usual in-app rating prompts into other types of prompts. This ties in with polljoy’s ability to deliver prompts to a targeted audience. For example:

There are some people out there that may never rate your game no matter how much they love it. These are the kinds of people you have to convince that something they do is beneficial for them in some way.

For example, polljoy helps you offer to users some in-game rewards for providing their feedback and rating your game. This way, they will feel that there is a reward for the action, making the prompt a part of the game as well. On another side, you could try to appeal to them that ratings are what makes you strive towards the next new update. That is sure to get them to rate, especially if they want more of a game they love.

Sure enough, in-game rating prompts are what will change the game of hunting for 5 star ratings. All you need is the right implementation, and the right partner to help you do it. With the right tool, the great targeting and timing, the right words, and the right incentives, reaching the top is not so impossible after all.

If you are a developer looking for more tips on how to boost your app’s ranking and get better reviews, check this article: Better Appstore Ratings.